The novel Anne Of Green Gables (slightly abridged) + Lego = an illustrated version
of the beloved story by L.M. Montgomery!

Welcome to Anne Of Green Brick Gables! All 38 chapters of the classic novel Anne Of Green Gables are now available on this blog, accompanied by illustrations created with Lego.

You may also use the links on the right side of your screen to jump to any chapter.

It has been a challenge to present the novel in this way, but I have had lots of fun. I've noticed new things in the novel, seen characters in different ways, and have come a long way with both my Lego-building and my photographing-tiny-objects skills.

I shot everything with a Canon S2 IS, which is an older digital camera (circa 2005) that has a macro mode which allows for good, intimate close-ups if there is ample light. I used several lamps, a couple of them with adjustable necks, to achieve the amount of light I needed, avoid shadows and illuminate portions of the scenery.

As the project unfolded, I hit several snags -- er, challenges. You may have noticed that, in the blog's description, I've said that this presentation of Anne Of Green Gables is "slightly abridged." It's true -- but very slightly. This happened for several reasons. One was that, while Lego bricks allow the builder to make or do almost anything, there are a few limitations. For example, in the novel -- like in the time period in which it was set -- just about everyone wore hats outdoors. You may be aware that Lego people can not wear hats and hair at the same time (unless they are connected in one piece, as with a recent Lego cowgirl and viking lady), yet in the novel, not only is Anne described as wearing a hat at the train station, but hats are mentioned throughout the novel, and there's even a whole chapter about how Anne dresses up a hat with flowers and wears it to church. (For that scene, I broke one of the sacred Rules Of Lego, and used some temporary glue to hold the flowers on the hat, and the hat to Anne's head.) In scenes where the book clearly states Anne wore a hat, but my illustrations could not reflect that, I often chose to remove references to hats.

Another big one -- Anne's hair. We all know the "classic" picture of Anne Shirley is of a freckled girl with two long, red braids. Yet Lego does not make red braids for girl minifigs -- yet. I'm sure it's coming. Lacking that option, I chose a wavy hairstyle that had two small braids in the back -- it was as close as I could get. As Anne got older (and got her hair cut) I was able to change her hairstyle to a short crop, and later, to a straight look, similar to what we see in the Megan Follows film.

My general rule of thumb was -- if a word or phrase in the novel seemed to stick out -- yet I couldn't reproduce it with the Lego that I had -- I would either not do an illustration for that particular scene or, if I felt it wasn't changing the plot or anything, I'd eliminate or tweak the word or phrase that was causing the issue. Before you purists exclaim in horror, I actually didn't do this all that often. Maybe a dozen times total. And sometimes, even though I couldn't represent exactly what was being said on the page, I just presented it anyway. Like in the scene where Anne sits next to a lady in a pink dress at a concert. I didn't have a pink minifig dress. So the lady wears a red one. I left the text in as pink, though, since L.M. Montgomery actually chose to use the word pink so many times, even referring to her as the "Pink Lady" in the scene. Oh well... red is kind of close to auburn pink, right?

Though I tried to keep everything in the illustrations Lego (and used the aforementioned glue that one time) I also occasionally used Paintshop. Well, I always used it to crop the photos, but sometimes I'd also use it to brighten or darken a picture, add contrast, or eliminate blemishes. Once in a while I added something to the photo, but this happened infrequently. For fun, see if you can find the illustrations where something non-Lego was added!

I thank you for your interest in this project, and I hope you have enjoyed (or will enjoy) the story! 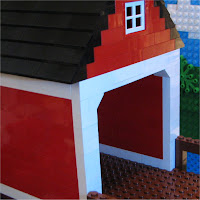 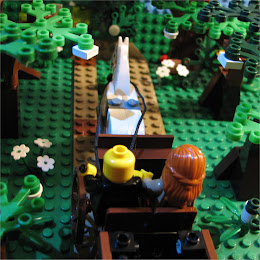